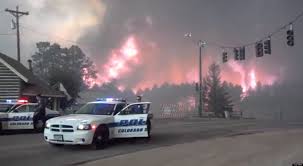 On June 11, 2013, Black Forest erupted in fire.  Living fairly close to the point of origin, we were among the first group to evacuate.  We were out for 8 days.  Our home survived.  Another 488 families were not so lucky.  They lost everything.

My husband and I saw, on our way out of the neighborhood, a sign of just what makes Black Forest people so special.  Cars, trailers, bikes, horses, and dogs were all heading away from the fire.  It was scary and intense, but orderly.  As we were all fleeing the fire, one Black Forest resident, wearing jeans, no shirt and carrying an ax, was walking with a purpose toward the fire.  I can imagine a story in which he has a cabin in the woods somewhere behind him, and he is determined with bare hands and an ax, to help.  That is what makes Black Forest the place it is.

In the days following our evacuation, Black Forest residents came together, privately and without government assistance, to determine how to help our neighbors.  I have attended a number of these meetings, leaving feeling encouraged by the power of ordinary people, voluntarily assembling, to help their neighbors.  They have called themselves “Black Forest Together, modeling their purpose after “Colorado Springs Together” (CST).  CST came together in the days following the Waldo Canyon fire last year, and has had spectacular results.

I was disappointed in the Colorado Springs Gazette’s coverage of CST, and in the refusal of the El Paso County Government which “made a policy decision up front as a board,” not to follow the city model.

Members of Black Forest Together have met with Bob Cutter, President of CST to talk about their experience, and to determine what worked and what could be improved in this new effort.  Cutter shared the following statistics:

Results matter.  The Gazette should throw Bob Cutter and the CST a parade, not criticize their volunteer efforts.

Seems easy.  And the spirit of Black Forest residents, as evidenced by the guy with the ax walking toward the fire, demands it.

Disclaimer: The above opinions are my own and in no way should be construed to represent Black Forest Together.