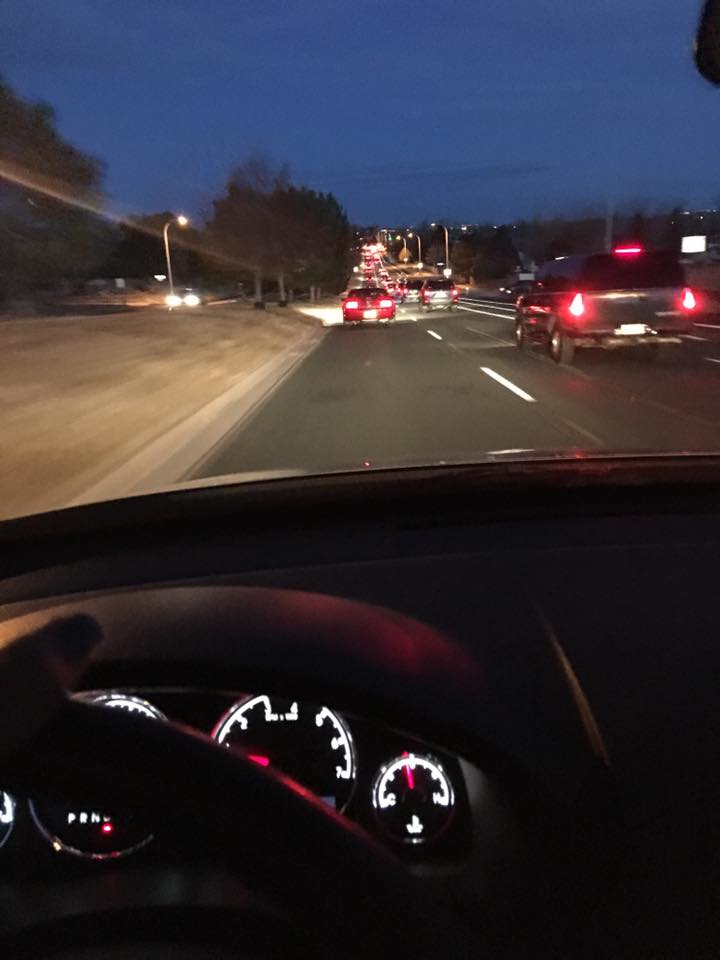 The City of Colorado Springs announced today (in part):

“The City announced today that the bicycle lane demonstration project along Research Parkway will be terminated. The bicycle lane striping and vertical delineators will be removed as soon as weather permits.

For the safety of the travelling public, the outside travel lane will continue to be a designated bicycle lane until lane markings can be changed to reflect vehicle travel.”

More information in an article in the Gazette.

Colorado Springs residents who live, visit or shop on the north side of town are familiar with Research Parkway. Between the Briargate Parkway and Academy Boulevard exits from I25, it is a main thoroughfare for residents on the east side of Colorado Springs to get to their jobs in Briargate, or downtown via the Interstate. And it’s a big, wide road as its name Research Parkway would indicate —3 lanes on each side, with a lovely landscaped median in the middle.

Imagine the surprise of those who use Research Parkway when, on September 28th 2016, the City of Colorado Springs removed one lane on each side of Research Parkway and turned them in to buffered bike lanes. This means that a full car lane is taken up with a buffered portion and a bike lane portion.

This seems odd, because Research Parkway already has a sidewalk on each side of the street. The south sidewalk is 10 feet wide and was constructed with the express intent of pedestrians and cyclists sharing that sidewalk.

In October, area residents launched a Facebook Page called Restore Research, and a website of the same name. On both pages, they have posted their reasons for being opposed to the bike lanes and the manner in which they were implemented. They also have a petition that will be delivered to City officials who are behind this project. They encourage petition signers to write a message to these officials in addition to simply signing the petition.

The change to Research Parkway isn’t the only change of concern to city residents. Another group called Safer CC is concerned about the safety of Colorado College students in the Old North End Neighborhood in the face of the city pushing a similar proposal there. Safer CC has responded with a website, Facebook page and petition of their own.

And all of this is happening while other cities —including Boulder Colorado— that have tried similar redesigns have rolled them back. Why? They cite worse congestion and more accidents.

So, why all the attention to bike lanes in the City of Colorado Springs? In March, the city hired Kate Brady to be its Senior Bicycle Planner. In an interview, Brady admits that, “change is hard,” but residents wonder why city officials made the decision without the consent of those who use Research Parkway. Mayor John Suthers said, “We do know that there is an adjustment factor,” while residents wonder why they should be the ones adjusting.

Colorado Springs currently has a Silver designation with the League of American Bicyclists. In order to have a Gold designation, the League suggest cities take three steps:

Just doing some quick math here, it seems that the City of Colorado Springs is looking to raise its status with the League of American Bicyclists by making decisions without regard to the opinions of the citizens it impacts.

When I authored the book Government Ruins Nearly Everything, I encouraged ordinary Americans to take a stand when their government makes decisions that create problems or when it makes problems worse. I applaud the efforts of Restore Research and Safer CC for taking a stand to hold their government accountable.

Join these groups, sign their petitions, and demand a government that knows whom it serves.

12/3/16 Update: Restore Research has also started a GoFundMe Page to help with the expenses of signs, etc. Help with a few dollars if you can!

Don’t You Dare Tell Me How to Best Defend Myself

It is important for ordinary citizens to defend their rights in their local communities. When elected officials forget whose money they are spending and whose rights they are eroding—when they forget who’s the boss and who’s the public servant—then it’s up to citizens to speak out and reset the balance.

Colorado Springs Mayor Sticks it to Taxpayers — Again In my 2015 blog, Who is…