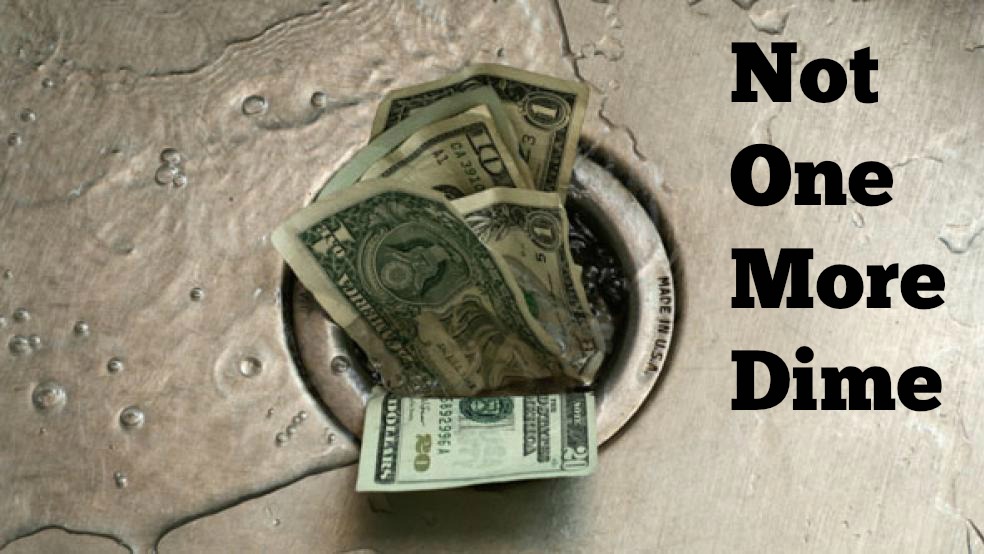 They are using a lawful mechanism to keep money that belongs to the taxpayers by misleading the voters in to thinking that there are no other alternatives to fund essential City services.

Back in 2015, I wrote a blog called Government Should Turn Over Every Stone Before Asking Us For More Money. At the time, I was talking about issues on the ballot then, including Colorado Springs issue 2C, also known as the “pothole tax.”

What I meant by my 2015 blog title is that since every dollar government spends is a dollar you and I earned, they should literally look everywhere in the existing budget for money they could reprioritize for essential services —before they ask us for more money.

That doesn’t seem like much to ask from our public servants, does it? It’s why Colorado passed the Taxpayer Bill Of Rights (TABOR).

But when ballots drop on March 11th for the April 4th election, Mayor John Suthers will again be picking our pockets asking us to pay more taxes. It’s called Ballot Measure 2, and here is the text of the measure:

WITHOUT INCREASING TAXES, SHALL THE CITY OF COLORADO SPRINGS BE PERMITTED TO RETAIN AND SPEND UP TO $6,000,000, THE ESTIMATED 2016 FISCAL YEAR REVENUE ABOVE THE 2016 FISCAL YEAR REVENUE AND SPENDING LIMITATIONS, AND A LIKE AMOUNT OF ANY EXCESS REVENUE IN FISCAL YEAR 2017, SOLELY FOR STORMWATER PROJECTS LOCATED WITHIN THE CITY OF COLORADO SPRINGS, ALL AS REQUIRED OF THE CITY UNDER LAW, PERMIT OR CONTRACT, AS A VOTER APPROVED REVENUE CHANGE AND EXCEPTION TO ANY CONSTITUTIONAL OR CHARTER LIMITATIONS THAT MAY OTHERWISE APPLY, WITH EXCESS REVENUE IN FISCAL YEARS 2016 AND 2017 BEYOND THIS $6,000,000 REVENUE CHANGE TO BE REFUNDED TO TAXPAYERS IN SUCH MANNER AS COUNCIL SHALL DETERMINE?

What this means in normal language is that the city would like to keep the TABOR overage instead of refunding it to us. And TABOR means that politicians must ask us for permission before raising our taxes, or to keep excess tax revenues.

Ballot Measure 2 is the City of Colorado Springs asking for permission —because it’s our money and TABOR requires them to ask. Which is also why we love TABOR. It reminds politicians that the money belongs to us.

This will be the third such increase that Mayor Suthers has been in support of since he was elected in May of 2015. Even before he was elected, Suthers proposed 2C, referred to as the “pothole tax”, which eventually passed.

I ran a campaign against 2C here and here, but was outspent over 50 to 1.

Then in January of this year, Suthers joined a coalition of politicians to raise taxes for roads state-wide, an initiative launched by Colorado Governor John Hickenlooper. But taxpayers in Colorado Springs already pay City sales tax for Pikes Peak Regional Transportation Authority (PPRTA), the 2C “pothole tax”, and regular sales taxes that go into the general fund, some of which goes to road work.

And now Mayor Suthers and the City Council want even more of our money by keeping the TABOR overage that is owed to the taxpayers. The ballot measure says the money will go to StormWater projects.

The next logical questions then are, “Should we give them more of our hard earned money? Have they demonstrated that they have made prudent decisions with our money thus far?”

Has Mayor Suthers looked under every stone to redeploy money in the ever-growing City budget before asking us for more?

Let’s take a look at a small sample of the spending priorities for the City of Colorado Springs, where the City’s General Fund Budget has tripled in the past 20 years:

Again, are Mayor Suthers and the City Council responsibly spending our tax money now? Do they deserve more of it? The obvious answer is: No.

Instead of trying to do anything to make government more efficient and effective, Mayor Suthers and the City Council seem focused on growing government and raising taxes.

And if I were a betting person, I’d bet we will see even more tax increases after the April City Council election. Watch specifically for them to bring back the failed 2014 StormWater Enterprise, along with its mandatory fee.

We will hear all kinds of spin: It’s for the cops, or the kids, or some other cause that intends to pull at our heartstrings. But the fact remains that as long as we have frivolous expenditures like bike path planners and City pharmacies and free medical clinics, the voters of Colorado Springs should take a stand. Not one more dime until they reprioritize our hard earned tax dollars on essential services.

Take a stand against politicians who forget that every dollar they spend is a dollar you and I earned. Ballot Measure 2 is just wrong.