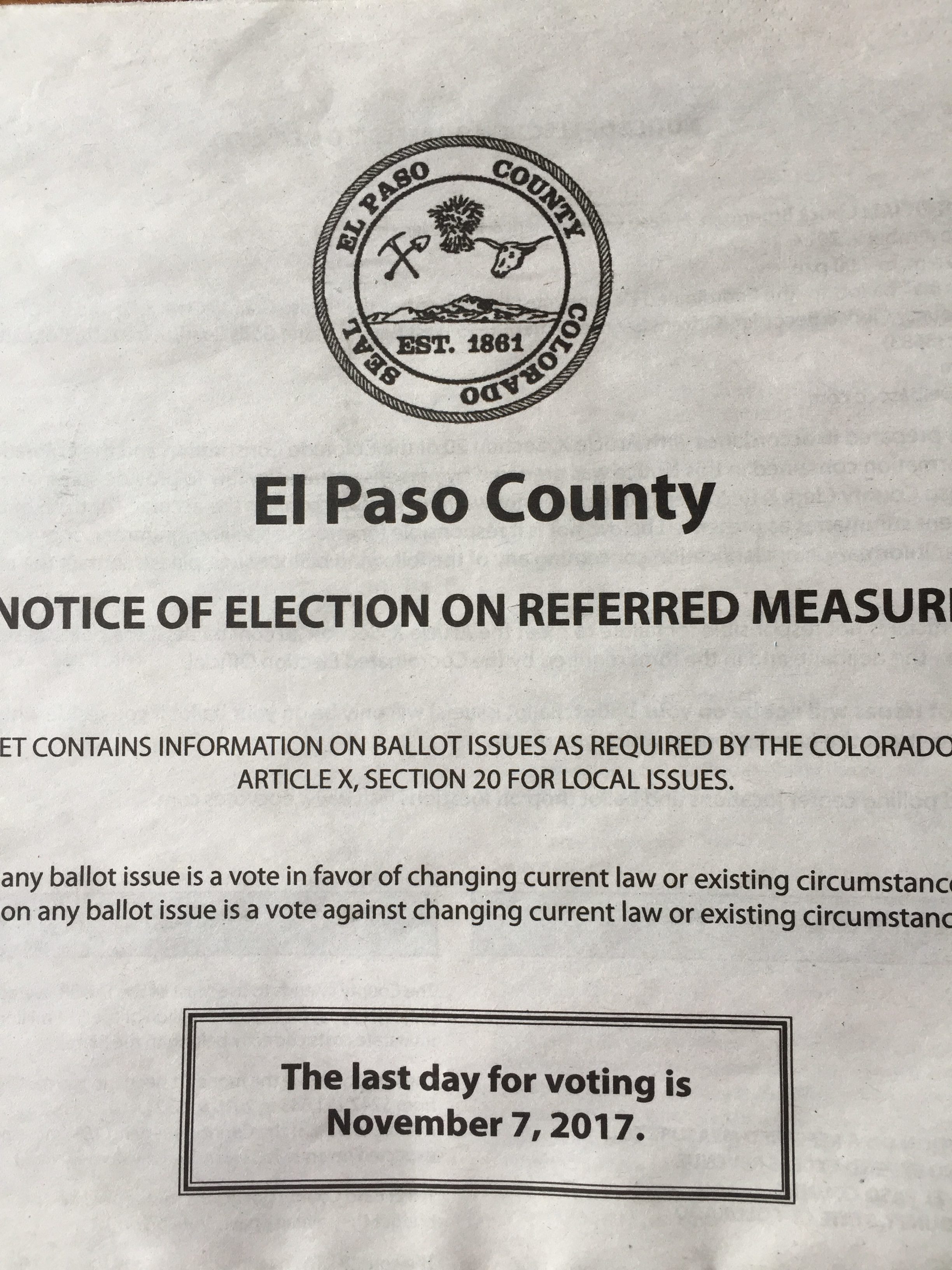 If you are registered to vote in this November’s El Paso County, CO election, you will have received a publication from the County Clerk and Recorder’s office. The publication is called, “Notice of Election on Referred Measures.” What this means is that any ballot issue that raises taxes is required by law to have a special notice sent to voters ahead of time.

You will have a TABOR notice for some issues, like County Issue 1A and school district mill levy increases. That is because they raise taxes. On other ballot issues like Colorado Springs Question 2A, you will not see a TABOR notice because the ballot question would raise a fee, as opposed to a tax. Although when we pay a fee or a tax, we see might it as the same money out of our pockets, if it’s a fee, it does not require a TABOR notice.

As a voter in El Paso County, I submitted some language for the “Comments Against Ballot Issue 1A” section of the TABOR Notice. The County received several such comments, so they combined portions of each of the statements received in the notice. Below are the complete comments I submitted. They provide more information than is in your TABOR notice from El Paso County:

El Paso County is asking to keep the excess money collected from the taxpayers under the Taxpayer’s Bill of Rights, or TABOR. The requirement on the Government to seek voter approval is a good thing; it gives voters the opportunity to reclaim their tax dollars.

Reasons to Vote No:

Taxpayers should vote “no” on this request because: (1) The ballot language could be misleading. (2) The County intends to use the money for projects that the County should not pay for. (3) Additionally, the County revenue has increased far more quickly than the population has.

The ballot language could be misleading. Although it is legal for the County to use the language, “Without imposing new taxes or raising tax rates,” it will undoubtedly lead many voters to believe that none of their money is at stake. However, if 1A does not pass, the money would be returned to property tax payers as a one-time tax credit of, “approximately $40 for a typical single family home.” Voters should ask themselves, “who is more likely to spend this money wisely, the County or themselves?”

The County intends to use most of the TABOR overage money (over $14 million) for the I-25 Corridor Gap project. Paying for I-25 (which accounts for $12 million of the $14 million) is not the County’s responsibility. Interstate costs correctly belong to the State of Colorado, not the County. In fact, part of the 2017 El Paso County strategy document lists, “develop a viable funding strategy to invest in County roads,” as a key focus of the County. Nowhere in their strategy document does it mention I-25. County money should focus on County roads. Otherwise, taxpayers are double taxed for the Interstate by paying for it in both their State and County taxes.

The County should stick to its strategic plan and focus on County roads, not the Interstate. Further, it should look at its spending to find efficiencies to make sure that taxpayers are getting the best value for their tax dollars.

Tell El Paso County politicians to sharpen their pencils and work within the record budget they already have.