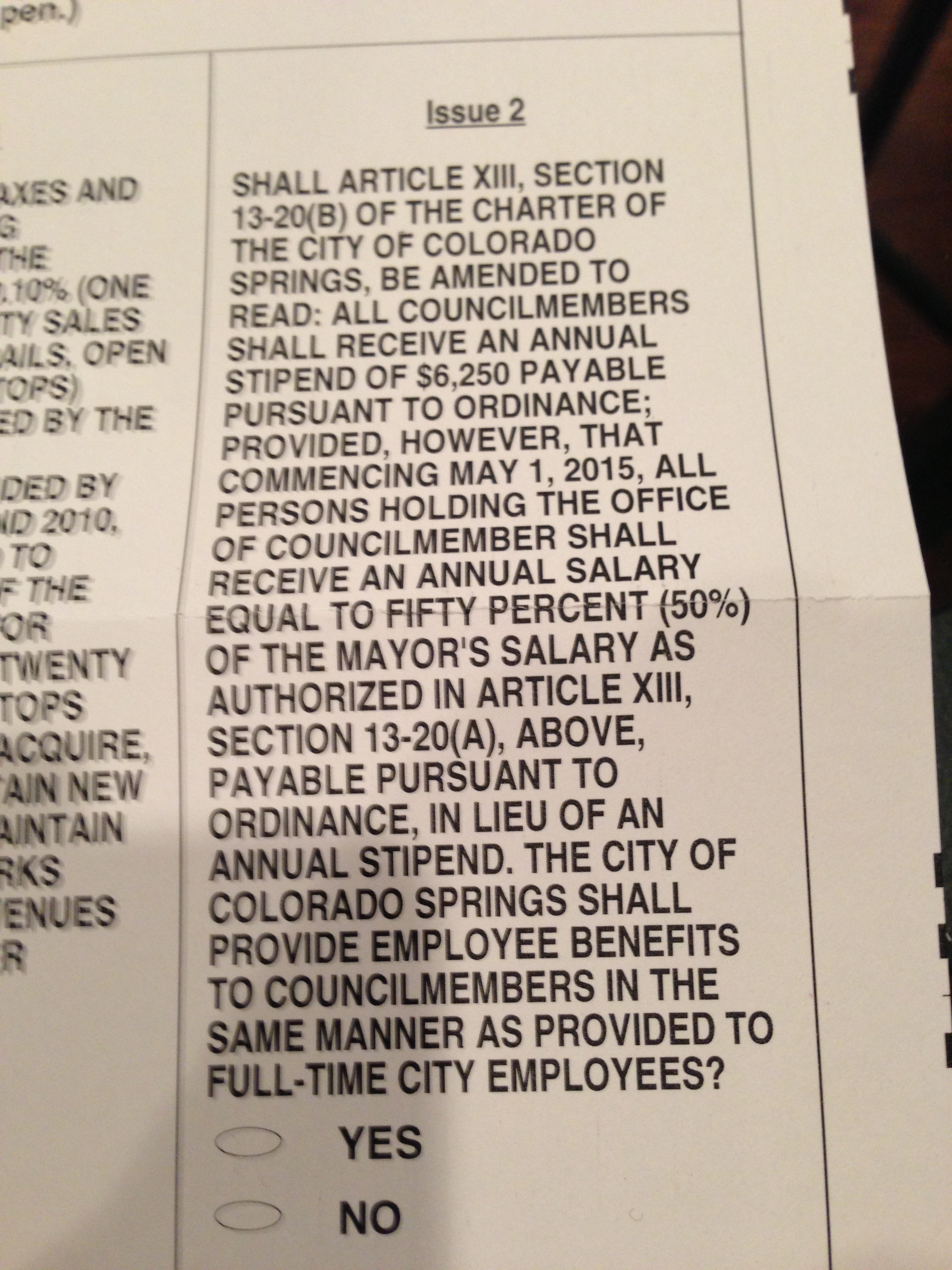 Those who follow politics in Colorado Springs remember the controversy during the 2010 election about deceptive ballot language.  This language was on the question of increasing the term limits of El Paso County Commissioners from two to three terms. But the ballot language used the phrase:

“Shall persons elected to the office of county commissioner be limited to three (3) consecutive terms, a modification of the current limits permitted by Article XVIII, Section 11 of the Colorado constitution?”

What voters want in ballot language is to be completely transparent as to what a ‘yes’ vote actually means.  In the case of the El Paso County Commissioners, if you didn’t already know they were limited to two terms, you would think that a ‘yes’ vote meant you were limiting their term further than where it currently was. Voters were so incensed, that the Commissioners were forced to place the question back on the ballot in 2012 with clear wording.

Now the ballots are out in the City of Colorado Springs and whoever was in charge of the wording did it again.  Issue 2 addresses a City Council Pay increase.  This was brought to the ballot by a slim City Council majority to raise the pay of City Council members from $6,250 to $48,000 per year.  Most voters, who are struggling in this economy, would not be in favor of increasing the pay of government employees by that margin.  In fact, a taxpayer advocate, Paul Kleinschmidt, believes, based on an informal poll his group conducted, that as many as 80% of voters would be against this increase.  Unless you have deceptive ballot language:

“Shall article XIII, section 13-20(B) of the Charter of the City of Colorado Springs, be amended to read:  All Councilmembers shall receive an annual stipend of $6,250 payable pursuant to ordinance; provided, however, that commencing May 1, 2015, all persons holding the office of Councilmember shall receive an annual salary equal to fifty percent (50%) of the Mayor’s salary as authorized in article XIII, section 13-20(A), above, payable pursuant to ordinance, in lieu of an annual stipend.  The City of Colorado Springs shall provide employee benefits to Councilmembers in the same manner as provided to full-time City employees?”

If you are just a normal voter, going through your life working and raising your family, do you know how much the Mayor makes?  Wouldn’t it have been more transparent to say “raise Councilmember pay from $6,250 to $48,000”?

I won’t get into why I believe a raise of their pay is a bad idea.  That isn’t the point.  The point is this language intends to deceive voters.  Colorado Springs residents were outraged about deceptive ballot language in 2010, and I urge them not to be fooled again.

Gun owners who watched President Biden’s address last night are right to be confused. While…